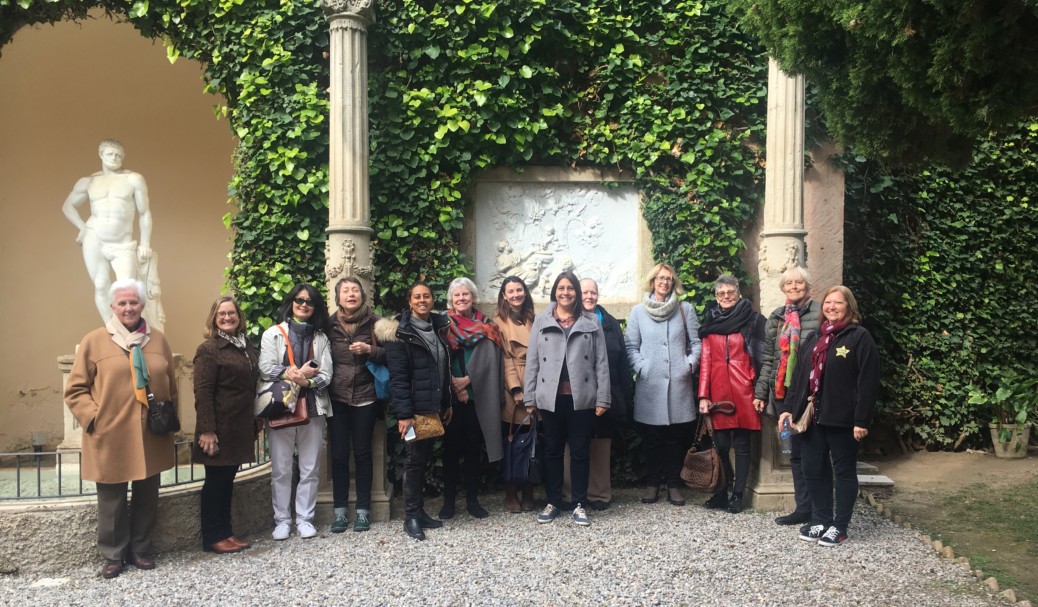 10 years ago, Francesca Facchini was first to be voted ‘member of the year’ of the Barcelona Women’s Network, and last year she reclaimed that title. A big part of why her contribution to the network is so prized are the Monthly Outings, which she has organised without pause since the BWN began back in 1998.

When you walk in Barcelona, you cannot look at your feet, you have to look up!

When the BWN was founded, the ladies asked themselves what social activities they could set up for the new club. The four aims of the network were—and remain—to foster friendships, encourage local cultural understanding, showcase members’ talents and give back to the community. Francesca, a devotee of group excursions, volunteered to organise outings for members once a month. It is an activity that ticks all four boxes with gusto. To start off, Francesca took inspiration from Barcelona architect and academic, Joan Bassegoda i Nonell, whose architecture tours of the city she had long enjoyed as a participant. With this keen knowledge of what members would enjoy, the Outings grew from there, unceasing for the last two decades.

In organising the visits, Francesca always seeks out “something extra,” which is a perfect catchphrase for the trips (and perhaps for the BWN more generally). The visits take in not just the touristic highlights—of which there is no shortage in Barcelona—but also hidden gems and more painstakingly arranged trips to see interesting places in and within easy reach of the city. Francesca keeps her ears to the ground for newly-opened sites and insider suggestions for captivating trips. The BWN was among the first to tour Casa Viçens the week that it opened, and is among the few groups to have negotiated a visit to designer Elsa Peretti’s studio in a village in the Empordá—it took over a year to persuade her to allow the visit, which was so interesting Francesca arranged another, putting in another year of requests. In 20 years, there have been only very few repeat visits, and only then because they really stood out as trips. Memorable excursions in the past include el Laberint d’Horta—twice, and both times returning with all participants (though once, just barely!); the Argentona Jug Museum; two visits to the castle-house of sculptor Xavier Corberó, considered the best Catalan artist after Gaudí; Casa Navás in Reus; a bespoke, spontaneous tour of Vic town hall to see paintings by Sert following the ‘official’ tour of the town; two trips to Joan Permanyer near La Bisbal, an eminent expert in Persian carpets; Casa Lleó Morera in Barcelona, and many, many more… In the wide spectrum between the mainstream ‘must-sees’ and local secrets are a wealth of happy memories dotted throughout the region.

To start off 2019 in style, the Outing attended the latest photographic exhibition at the Fundació Miró in Montjüic. February’s outing was to the Museu Romantic Can Papiol in Vilanova i la Geltrú, a short train ride from Barcelona. Can Papiol is a well-maintained 19th Century town house and an exquisite hidden gem showing daily lives of the upper class and their servants in Catalonia’s history. In March, the group left the city again to take in the architecture of Terrassa, including the Modernist Casa Alegre de Sagrera and three Romanesque churches.

Each month’s Outing is a surprise pulled from the magic hat: maybe you will have heard of the destination, maybe not; maybe it is somewhere you have always wanted to see, and maybe it is somewhere you would never in a million years have been able to come up with! You may not have wondered what a botijo is before, but seeing one and hearing about it from the director of a museum in English that, let’s just say, needed the practice, will certainly add “something extra” to life. And whether you come away with a new fascination for traditional water containers or not, touring with a diverse group of women means that the Monthly Outings are sure to send you home with new friends.

The Monthly Outings sally forth on the third Wednesday of each month, and, depending on the destination, are largely half-day excursions. Participants often congregate for a coffee before the visit, and stay on for an optional menú lunch after the tour. Logistics are tailored to the group size. Francesca always arranges private visits, but the per person cost is usually low, sometimes even free.

To find out more about the BWN and its activities, as well as to sign up for next month’s Monthly Outing, stop by our Coffee Morning.